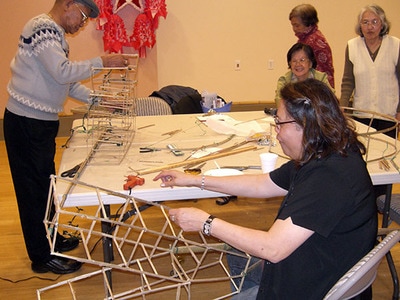 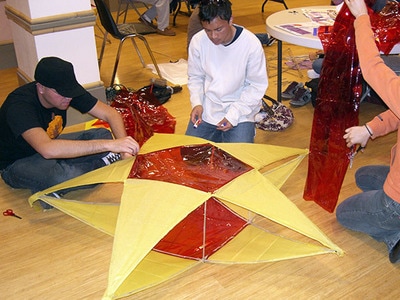 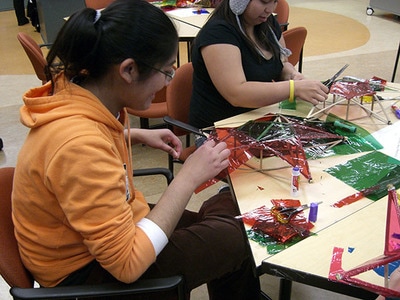 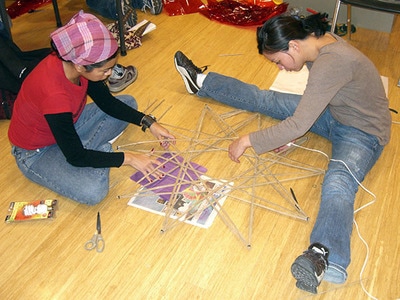 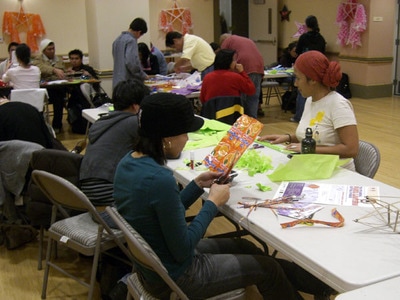 Building a Parol is always better with a group. So bring yours to the Bayanihan Community Center and build your star lantern today. Workshops are being held at the Bayanihan computer room Fridays from 5pm to 8:30pm.
Register for Parol Workshop

A video for the visual learner in all of us.

​You can also download instructions on how to build a parol on the link below.
Parol Instructions

What you need to build a Parol

​The first step is to get 2 of the bamboo sticks and tie one end together with rubberbands. Make 3 more bamboo V's. You should end up with 4 bamboo V's and 2 left over sticks.

​In the next step we will make the star shape. To make it easier to understand how to do this the next images will be color coded. The red sticks will make the top point of the star. Make a W shape with 2 of the V's with the left V overlapping the right V. Now bring over the right stick so it sandwiches one leg of the left V. With loose leg of the left V bring it under and combine it with the right V. Use a rubber band and tie the point together. You should end up with an A shape.

​Now with one of the single bamboo sticks, thread it through the center of the A. Make sure that all sticks overlap each other. Repeat these steps and make another star. Now that you have 2 stars, combine them and tie all the points together with rubber bands, forming one single star.

Notice that the center of the star frame is a pentagon. With the stars securely tied together, pull apart the center of the frame. Now place one peg at each of the point of the pentagon. Now we have a completed Parol frame, but before we go any further we have to secure the pegs. We do this by using hot glue. Put hot glue where the peg meets the frame. Be sure to get both sides of the peg.​

Use the glue stick to put down a good amount of glue on the center of the frame. Now we put the cellophane. You want to do as less cutting as possible. Line up the straight edge of the cellophane with one of the bamboo sticks, so now you only need to cut 4 sides instead of 5. Use your scissors and cut the extra cellophane from the center of the frame. You don't need to cut too close just do a rough cut around the edge.

​Put some glue on the loose bits of cellophane and rap it underneath the bamboo to get a clean edge. Now cover the center of the reverse side of the star. Once that is done we start decorating the points of the parol. Put glue on front and reverse side of a point. Then place the cellophane.